The Chair's paper/panel has been selected to be included in the Economics (Association for Institutional Thought: AFIT) program at the conference. 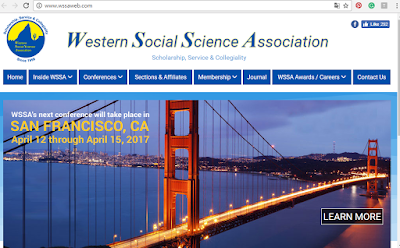 * Note: AFIT was officially organized on April 27, 1979 at the 21st annual conference of the Western Social Science Association.

The 38th Annual Meeting of AFIT is scheduled to take place on April 12-15, 2017 in San Francisco, California, at the Hyatt Regency Embarcadero in conjunction with the Western Social Science Association (WSSA) 59th Annual Conference.
Conference Theme:
Institutions: the Cause of, and Solution to, all our Economic and Social Problems?
The 2017 Association for Institutional thought (AFIT) Conference invites you to submit papers and/or propose full sessions that examine the role of institutions in human society.  Specifically, we encourage papers and sessions that investigate how complex formal and informal institutions have contributed to the major global economic problems we currently face, and how new and modified institutions can contribute to mitigating those problems.  We also welcome more abstract papers dealing with methodology and institutional theory, as well as more detailed papers and sessions dealing with specific institutions, issues, countries, or historical periods.
The growth and development of human communities has been a slow and unsteady process.  It has taken more than 10,000 years to transform hunter-gatherer societies into today’s globalized community.  Dealing with strangers is not easy for humans, whose instincts and emotions have been hard-wired through the millions of years of evolution of humans and their ancestors living in small groups of hunters and gatherers.  Behavioral and experimental economics show that exchanges with unfamiliar people on a one-time basis remain much more difficult to carry out than repeated exchanges with an unchanging group of relatives and fellow group members.  History provides a seemingly endless set of examples of exploitation, theft, slavery, rape, murder, war, and other destructive human interactions. Today, the growth of interdependence has left many people feeling vulnerable to the decisions and actions of strangers.
Yet, humans have somehow figured out how to deal more constructively with ever greater numbers of people beyond their immediate families and clans, as evidenced by the high degree of interdependence among the world’s 7 billion-plus people today.  Humans have managed to build larger and increasingly complex societies by collectively developing, by trial and error, new forms of social and economic institutions.  Such institutions have ranged from formal rules, governance structures, and well-defined hierarchies to innumerable informal norms, traditions, customs, ceremonial behaviors, and spiritual beliefs that constitute cultures and sub-cultures.  However, despite the apparent successes, modern societies face some daunting global problems that their institutions are not dealing with very well.
It should not be surprising that our current formal and informal institutions have not been able to effectively solve all economic and social problems.  Thorstein Veblen (1899, p. 207) pointed out that institutions are always inaccurate and sometimes even damaging.
Not that the institutions of to-day are wholly wrong for the purposes of the life of to-day, but they are, always and in the nature of things, wrong to some extent.  They are the result of a more or less inadequate adjustment of the methods of living to a situation which prevailed at some point in the past development; and they are therefore wrong by something more than the interval which separates the present situation from that of the past.
The rapid changes that post-World War II economic development and globalization have brought about suggests that the gap between reality and the necessary institutional framework to sustain that reality has grown.  Hence, we observe the struggles in dealing with many complex economic and social issues, such as:
There are, of course, many more issues beyond these at the global, regional, and local levels, and we by no means wish to suggest that papers and sessions be limited to only these issues listed here.  AFIT encourages the study of all aspects of institutions under all economic and social circumstances across all countries and time periods.
The conference also seeks proposals for panels that review and discuss books recently published, especially by AFIT members.  All proposals for papers and sessions reflecting the traditional and analytical perspectives represented by the Association for Institutional Thought will be given serious consideration, although preference will be given to proposals that address the theme of “Institutions: the Cause of, and Solution to, all our Economic and Social Problems,” that is, papers and sessions that deal with how specific institutions got us to where we are today and how institutional change can mitigate the problems we currently face.
As always, AFIT encourages proposals from undergraduate and graduate students, and AFIT sponsors prizes for outstanding student papers.  Our website for the announcement of the student competition: www.associationforinstitutionalthought.org.
The format of the 2017 conference panels does not include discussants.  However, if you organize a panel, and you find it necessary to have discussants, you are welcome to do so.  Proposals for complete sessions are encouraged.