Mu-Jeong Kho: The petition for the release of Spain's political prisoners and for fair elections in Catalonia on December 21st.

The Chair of the IPEAD, Mu-Jeong Kho (academic affiliation: University College London) joined the petition below for the release of Spain's political prisoners and for fair elections in Catalonia on December 21st. 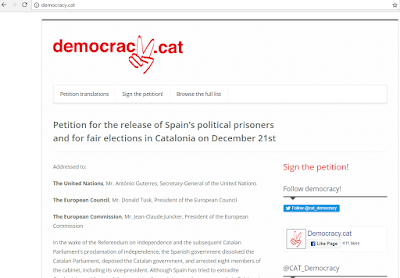 Addressed to:
The United Nations, Mr. António Guterres, Secretary-General of the United Nations
The European Council, Mr. Donald Tusk, President of the European Council
The European Commission, Mr. Jean-Claude Juncker, President of the European Commission
In the wake of the Referendum on Independence and the subsequent Catalan Parliament’s proclamation of independence, the Spanish government dissolved the Catalan Parliament, deposed the Catalan government, and arrested eight members of the cabinet, including its vice-president. Although Spain has tried to extradite Catalonia’s president and the remaining four ministers, who are currently in Belgium in an effort to ensure a fair hearing, their efforts have been so far unsuccessful. The Spanish prosecutor’s comparison of the October 1st referendum on Catalan independence with an “armed coup d’état” reveals Spain’s untenable position.
The Spanish government’s appeal to the rule of law cannot disguise a political persecution of an extent and intensity not seen since the Franco dictatorship. The government’s obvious goal is to not only instill fear in the Catalan people by censorship, arrests and threats before the referendum, but also by the overwhelming brutal police violence that was visited upon peaceful voters on October 1st itself. Furthermore, this has continued since the referendum, by extending judicial persecution to civil servants, mayors, teachers, journalists, and any person who voices opinions on behalf of the citizens’ peaceful exercise of their democratic rights.
Spanish president Mariano Rajoy has called for snap elections in Catalonia on December 21st, while prominent members of his government and the Senate have simultaneously declared their intention to ignore any victory of pro-independence parties. Even without the incarceration of prominent political leaders and would-be candidates, their mistreatment in custody and persistent far-right violence against journalists and citizens, the response of the Spanish government is hardly creating a climate in which fair and free elections can be properly held.
Because Catalans insist on a democratic solution to this conflict, they are willing to once again decide this matter through the ballot box. However, in order for those elections to be an honest arbiter, certain conditions must be met, and thus the undersigned hereby call on the UN, the European Council and the European Commission to:
The only peaceful solution to the conflict between Spain and Catalonia is a democratic one. It is time for the European and International communities to assert their influence in insisting that Catalan citizens be given the chance to express their opinion over the future of their country freely and democratically without fear of retribution in the courts, by police or by far-right extremists.


This petition will be considered one of the contents of the Mu-Jeong Kho's forthcoming book, 'Economists in Manifesto'.